Article based on a presentation by the author to a mixed Sikh and non-Sikh audience, following the opening of Shaheed Bhai Amrik Singh Lecture Theatre at Guru Nanak Darbar Gurdwara complex, Gravesend (UK), on Sunday 2 December 2012.
(Quotations from Sri Guru Granth Sahib give Ank or page number as “SGGS number” )
Photos by Jagdev Singh Virdee 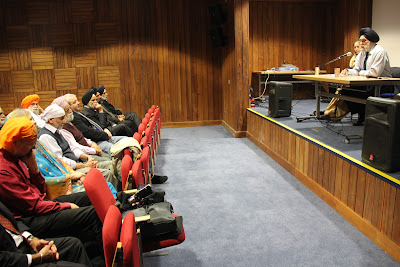 The topic is presented under four main headings:

1. The political, religious and social conditions of the times, including one important incident, which would have influenced Guru Nanak Sahib’s teaching mission.

3. His Founding Precept called the Mool Mantar & its significance.

4. Main features of the Guru’s teaching.

“When I set my eyes on the priceless treasure left for me by my ancestors, then my heart was filled with great joy !” (SGGS 186)

That is a reference to the great Sikh heritage, the Sikh virsa.

“The narratives of the forefathers, guide their descendants and make them worthy of their heritage; i.e. make them “spoot”, meaning good sons and daughters.” (SGGS 951)

Guru Nanak was the first popular leader of the people of Panjab.

Prof Satbir Singh, professor of Sikh history, used to ask his 1st year students when starting a new class, “Name some famous Panjabis before Guru Nanak Sahib. “ Some brighter students would mention, Porus (a Punjabi king, who showed great bravery when opposing Alexander the Great in 326 BC); Anangpal (about 1100 CE and also 1st ruler of Delhi), and maybe one or two others.

But all hands would go up when asked to name famous Panjabis after Guru Nanak.
Students would even start with the Sikh Ardaas – supplication – naming the ten Gurus starting with Guru Nanak !

The point is that the history of Panjab started with Guru Nanak Sahib. Prof Puran Singh wrote, “Punjab is neither Hindu nor Musalmaan; Punjab lives in the name of the Gurus”
Panjab na Hindu na Musalmaan, Panjab jeenda Gura(n) dey naam te

Panjab is the land of the Gurus.
Panjab, Gurua(n) di dharti hai.

Why was there a need for introducing an independent system? The “Tisra Panth” or Third Path (religious system) after Islam and Hinduism?

From Guru Nanak’s holy hymns, His Gurbani, it is clear that there was very little in the political, administrative and religious practices of his time, that he found commendable.

But first, let us look at this incident which took place in 1499, mentioned in Islamic historiography called, Tarikh-e-Farishta.

Farishta was a leading Muslim historian of the time. He records the execution of a Hindu youth called Yodhan of village Qateen. Yodhan was tried by the Ulema of Northern India i.e. the Muslim scholars versed in Islamic law.

So, what was Yodhan’s crime ?

One day, in discussion with a Muslum, Yodhan said
“The religion of Musalmaan is true; and the religion of Hindu is true also.”
The Muslim did not agree and felt that such a statement was an insult to Islam. It amounted to blasphemy.

He reported to the local Quazi Pyare and Sheikh Badar. The Quazi took a very serious note of the “offence”, whilst the Sheikh was prepared to ignore the matter. The dispute was referred to the local ruler of Lakhnauti, Aazam Humayun. He could not decide either, and, as it was a matter which concerned Islamic law, referred the three to Emperor Sikandar Lodhi at Delhi.

Sikandar Lodhi was fond of listening to intellectual religious debates. So he invited most well known Ulema of NW India to hold a seminar. The scholars included Ulema from the Royal Court in Delhi. All gave the same verdict: “Yodhan must either convert to Islam or be put to death.”

Farishta says that it was a famous event of the time. The news would have reached Guru Nanak Sahib. From his sacred hymns (Shabads), like those written after the cruelty of Babar the invader, one can well imagine the impact of such news on his gentle nature.

Farishta does not give the reasons for the verdict. However, according to Harbans Singh Noor, various participants in the seminar would have used typical Islamic arguments often used to mistreat Hindus; and to establish that Hinduism is not a true or righteous religion. Arguments such as: that Hindus are polytheists and idol worshipers; that Hindu deities are based on myth, while Islam was revealed to Prophet Mohammad; that it was the duty of Islamic rulers to protect Islam. They would have followed the doctrine of “Deen Panab” propounded by an Islamic religious scholar, Mubarak Ghaznavi.

About the political and religious conditions in those days:

Let us now see, what Guru Nanak Sahib wrote about the rulers, the administration, men of religion and about the public. The following are some quotations from Guru Nanak’s sacred hymns (Gurbani or Shabads) in the Sikh Holy Scripture, Guru Granth Sahib:

The dark age of Kalyug is the knife, the kings are the butchers, and dharam has taken flight i.e. there is no justice or righteousness. (SGGS 145)

Greed and sin are the king and minister and falsehood is the revenue collector. (SGGS 468)

The kings are tigers and those who do their bidding, are dogs. They go and harass people at all times; regardless of whether people are resting or sleeping. (SGGS 1288)

The Kaji, sits as the Muslim judge to administer justice
He repeats the name of Allah as he keeps count on the beads of the rosary (tasbi)
He takes bribes and deals out injustice.
If questioned, he quotes some convenient religious text. (SGGS 951)

Man eaters do the Namaz prayers.
Those who wear the sacred thread wield the knife. (SGGS 471)

According to Bhai Gurdas, the truth, or the righteous path was abandoned; and Brahmins and the Mulanas were going for each other’s throats !
Sach kinaaray reh gia kheh marday Bahman Mulaanay. 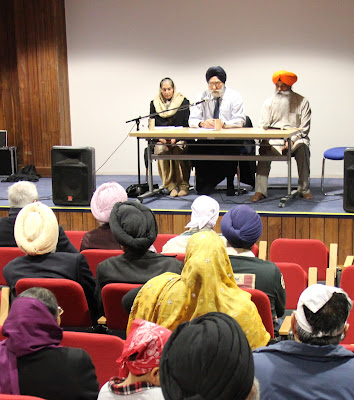 Those were the conditions, when, according to Sir Mohamad Iqbal:

Guru Nanak began his mission by describing the nature of the Creator Being, the Source of Reality, as revealed to him, so that human beings, the created, would aspire towards those qualities and establish a direct connection with the Source without the need for a human guru to intercede. The Guru Jyot (Light or Guide), is the Word Guru of which Guru Grath Sahib is the embodiment.


Ik Oankaar – The indivisible One, so that all creation is withim that One. There is no “other”. There is only One and no “other”.

Satt Naam: True is the Name of that One (by whatever Name remembered). All our existence is within that One ultimate Reality. Naam is our total awareness and experience. Naam is the totality of our existence.

Karta Purakh: The One is The Creator Being of all, Who is within and without our perception of Creation.

Nirbhau: Without fear and Nirvair: Without animosity – He has no enemy.

These two qualities, Nirbhau – without fear - and Nirvair – without enemy, give the Sikhs their civic code.

Ajoni: Never born, outside cycles of birth and death.

Saebhang: Self existent. Ever fresh, Self renewing.

Gur Parsaad: Only through the Grace of the Holy Preceptor can one be united with the One, and this falsehood of duality between the Creator and the created, removed.

Sikh Dharam is also called the Naam Marag, the Path of Naam.

(Some headings like the Sikh martyrdom tradition, are suggested as topics for seminars in future.)

Sikhi is the preferred word for Sikh religion.

Three linked Sikh concepts of Naam, Guru and Sangat express the unity of the Ik Oankaar, the One Creator and the created.

All creation is manifestation of Sat Naam. The Guru is the Guiding Light, the Jyot, the Guiding principle of Naam;. and Sangat teaches us how to live in accordance with the Guru’s teaching. Sangat, the holy congregation, interprets the Guru’s Word and teaches us the Jugat or Jeevan jugat, i.e. how to live our lives.

So, Jyot and Jugat go together in the Sikhi Naam Marag. The Path of the Naam.

All Sikhs have direct access to the Holy Scripture, Guru Granth Sahib. There is no intermediary between a Sikh and Ik Oankar, Waheguru, the Wondrous Giver of Knowkedge, the Dispeller of Darkness. That is the Khalsa connection, the direct link.

It follows, that there is no ordained priesthood in Sikhi.

Sikhi is God loving monotheism. God love is expressed in many ways:
Through the twin concepts of sewa with simran.

Sewa means serving all without distinction, while doing simran i.e. remaining immersed in God love and God awareness. Active sewa is a pre-condition for salvation.

In that same spirit of love and a desire to serve humanity, a Sikh also works tirelessly towards a just society. Sometimes, as the ultimate solution, a Sikh resists oppression and injustice with own life and, if necessary, through armed struggle.

Says Guru Nanak: If you wish to play the game of love, be prepared to give your life for the righteous path/cause (i.e. be reborn in this life as the invincible mar-jeevra.). (SGGS 1412) Every person has the right to die the death of a warrior fighting for the righteous cause. (SGGS 580)

Sikhi rejects every excuse for any form of discrimination.

Sikhi raises the status of women by treating all as soul-brides of the Lord Creator.

Sikhi promotes the path of udham, ghaal and Nadar. Action and initiative; sustained effort with total belief in Waheguru’s Grace (Nadar) which can instantly break the cycle of Karma. In short, look after your “here and now”; and “hereafter” will look after itself.

Sikhi makes freedom from fear a human goal i.e. cultivates the Nirbhau quality - - so that a Sikh remains in positive spirit or chardhi kalaa in Waheguru’s Will or Bhana.

Starting with Guru Nanak Sahib, the Guru Jyot and Jugat, passed through nine successor Guru-persons, and “created a productive, fearless and honest nation out of powerless downtrodden people, at the fringes of society.” (Dr I J Singh)

By the final Command of the Tenth Master, Guru Gobind Singh, the Jyot resides in Guru Granth Sahib, the Word Guru, and Jugat is in the holy congregation, the Sangat, represented by Guru Khalsa.  The distinction between the Guru and the Gursikh, the Khalsa, following in the Guru's footsteps, was removed (Aapay Gur-Chela principle).

Sikhs were given a new religious order: which we can truly say is “of the people, by the people and for the people” 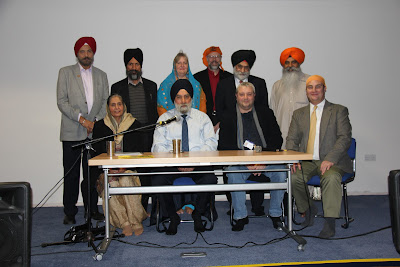