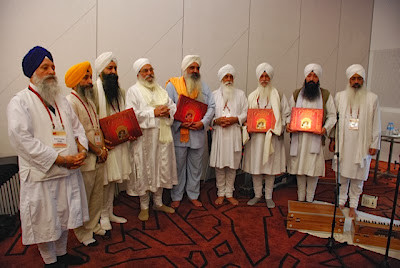 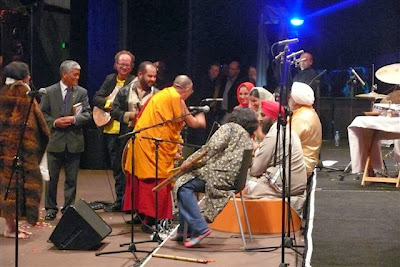 British Sikhs welcome this educational visit by the Minister.

Not surprisingly, in many respects, British Sikh experience of integrating and engaging with the plural British society, is similar to the experience of fellow Sikh Australians. This note summarises the commonalities and differences with a view to learning from each other.

This briefing note is under the following main headings:

2. Back ground: Victoria State and the Sikhs

3. Sikh Australian challenges and concerns which are similar to those of British Sikhs

- Education of public servants about Sikh identity and religious needs

4. Issues which affect relations with majority or other faith communities

5. Monitoring of Sikhs as a distinct religio-ethnic community

Sikhs are looking for the betterment of all. They spend their lives aspiring towards the central theme of Sikhism, expressed as “Sarbat da bhalaa”. That means, working towards, and wishing for the good of all, regardless of race, gender or religion. The sacred Word (Gurbani) in Sri Guru Granth Sahib (SGGS), the Sikh holy Scripture, revered as the Living Guru or Preceptor, teaches them: “To serve [God’s creation] in this world is the ultimate goal of human life”(2)

Sikhs believe that acceptance of diversity is a spiritual experience. It is the basis of healthy multiculturalism, which promotes “unity in diversity”, a slogan the Sikhs share with Australians.

Respect for diversity also means assertion of own distinct religio-cultural identity. Therefore, the Sikhs are a culturally sensitive people. Sikhs have always believed that they must lead lives which complement the mainstream way of life, in the countries they live in. All they seek is that their basic religious rights and identity as a distinct community, are also respected.

2 Back ground: Victoria State and the Sikhs

Based on briefing by Dya Singh of Melbourne (3)

It will be helpful to take a brief look at the Sikh Australian interface with the Government and other communities in the State of Vicoria. Many issues are common to Sikhs living in the UK and other Western countries. In some respects Victoria State is ahead of UK government in engaging with minorities like the Sikhs.

Victorian state politicians make regular visits to Gurdwaras and also inform themselves on Sikhs and Sikhism.

The Victorian government is to be complimented for funding schools to teach cultural awareness (4). This augments a generational healthy change towards a vibrant multicultural society. Sikhs are very much a part of that change .

Government servants are taught about Sikhs and their articles of faith and special needs.

In Victoria they are issued with police cards, which are proving to be effective.

In Victoria, more attention is given, and funding provided for multicultural education, especially in schools. The stress is on “world citizenship” as a school subject.

Racial tensions: Once the issue was raised in Victoria a few years ago, the State Government was very quick to tackle the issue seriously and positively e.g. by even sending delegations to India. Victims have been helped (5).

Generally, there are positive moves by the Victorian authorities to raise the profile of Sikhs and Sikh Australians are grateful for that.

The main Sikh Australian concern (and challenge) is to remain an extrovert community; while promoting own distinct identity very much as part of Australian multiculturalism and responsible citizenship; and not to develop ghetto mentality.

They want to be recognised and counted as “Sikhs”, while making maximum contribution as hardworking, law abiding and loyal citizens of the countries they live in.

The main challenges for the Sikhs and the governments they deal with, arise from the above Sikh aspirations.

Education of public servants about Sikh identity and religious needs

Sikhs in Australia and the UK feel that more structured education is needed about Sikh identity at all levels in the Government and agencies. For example guidelines about Sikh articles of faith (including Sikh turban) should be issued and special modules introduced in courses given to government servants i.e. public servants, police, security services, prison services, customs, social services and others likely to deal with Sikhs. This is being done actively in the USA.

One example of guidance which can be used for training and issued to public servants has been developed by the UK’s Equalities and Human Rights Commission (EHRC) in consultation with nationwide Sikh organisations (link at footnote (6) ).

Sikhs do not seek converts; and resist activities by religious groups which aim to impose their “way of living” on others.

British Sikhs share the Sikh Australian view that funding for multicultural and inter-religious activities should be aimed at bringing people together, not to help create a ghetto mentality within any one ethnic or religious group .

Selective pampering of certain minorities is frowned upon by other minorities and can cause tensions (7).

Sikh Australians and British Sikhs also wish to avoid the path followed by another major religious group, Islam. For example in France, where due to the ban on the wearing of religious symbols or headgear, the Sikhs continue to be persecuted by not being allowed to attend schools with turbans.

Owing mainly to lack of education, Sikhs continue to suffer racial attacks, both, as Sikhs, and also due to mistaken identity as a result of terrorism, wrongly justified by fanatic elements in the name of another major world religion, Islam . Most annoyingly, sometimes the Western media show remarkable ignorance about the Sikhs and become a party to spreading ignorance relating to Sikh identity. That also happened after the 9/11 terrorist attacks.

Incorrect “terrorist” profiling by security agencies continues to be a problem for Sikhs while travelling in Western countries (8).

5 Monitoring of Sikhs as a distinct religio-ethnic community

Incorrect religio-ethnic classification of Sikhs, one of the most visible communities in the world, has resulted in inaccurate count of the Sikhs in Australia and the UK . This affects their rights (9).

Regrettably, the impression gained by British Sikhs is that counting them as a distinct religio-ethnic group in the Census, as they are legally entitled to by the House of Lords in 1983 (Mandla case), has become a political issue, wrongly associated with Sikh “separatism”.

We understand that the Australian government has yet to recognise Sikhism as the fifth largest world religion; well represented in numbers in Victoria.

Due to the establishment of well over 300 Gurdwaras around the country, active participation in interfaith events at local level, literature published by The Sikh Missionary Society UK, and also led by those like Lord Indarjit Singh at national level, British Sikh interfaith engagement and experience has been positive. Relations with other minority communities, living close together in towns like Southall, have been tested by world and national incidents and remain good. Local community elders have taken responsibility to ensure peaceful co-existence.

However, the Sikh experience in the area of effective representation of Sikh identity and issues at national level remains unsatisfactory due to a number reasons.

Questions have been raised from time to time if the Government and senior officials are talking to the right people in the community, who are in touch with grassroots issues and concerns. All communities have ambitious individuals, who, as they get closer to the official ear, get further away from real grassroots organisations. Some rely on paper organisations to claim wide representation. Sometimes the officials too are content to deal with such articulate and often affluent individuals pushing themselves for representative positions and appointments.

There are no simple solutions except for the communities to improve own organisation and representation. This is happening in the UK with more involvement of well educated younger Sikhs and through widely based national organisations, and a round-table representative body, the Sikh Council UK.

More identity Sikhs are entering the political field at local and national levels. We hope to see Sikh identity representation in the House of Commons, and in the British media in the years to come.

(3) Dya Singh, Melbourne based “world music” artiste , who also led Sikh opening and closing ceremonies at the Parliament of World Religions (December 3-9, 2009). He is closely involved with multifaith events and multicultural education in schools. Himself, a full identity Sikh, he gets regular work assignments with schools in Victoria and other states, to give talks about multiculturalism, especially, regarding cultural sensitivities. Website: www.culturaleducation.com.au

(4) For example, recently, a team led by Dya Singh, organised half day series of workshops on cultural awareness, school bullying, cultural song and dance and faith sensitivities to three faith-centric private schools - a Muslim school, a Jewish school and a Christian school. They all came together for one day and went away having learnt a little more about each other’s faiths including visible identity Sikhs, for Dya Singh was leading the team.

(5) One young Sikh kid who was killed by an Indian student in a domestic dispute and which in the early stages looked like a racial killing was then state funded to be taken back by his parents to be properly cremated in India.

(7) SEWA Oz note: There is a tendency sometimes of the government funding certain communities which appear to encourage a 'ghetto' mentality rather than helping these communities to integrate into the mainstream of Australian society, which is, after all heading towards a healthy multi-cultural society. The impression gained is that one minority community is given special privileges like having own prayer rooms in universities where sometimes even Christians and Jews (who are “prolific” in Melbourne) do not have such facilities. Sometimes just to appease the Muslims, all meat served in mainstream events is allowed to be halaal. That Sikhs do not eat halaal or kosher is ignored. This kind of selective pampering to certain minorities is frowned upon by other minorities.

(9) Although, most recent census gives a figure of 33,000 Sikhs in Victoria, it is believed that the the actual figure is much higher, especially when the floating populations of students is added. There are about ten prominent Gurdwaras in Victoria in addition to many other centres where smaller communities of Sikhs gather for prayers regularly. New gurdwara in Keysborough district can seat 1,500 and can cater for about 5,000 on big occasions. It is built on 4 acres of land.

Similarly, we have no accurate figures for Sikhs in the UK due to a missing separate “Sikh” box in the Census forms. As a result Sikh numbers are estimated between half to a million Sikhs!

Article may be published with acknowledgement.