Our Grand-daughter "A Bundle of Joy" ! 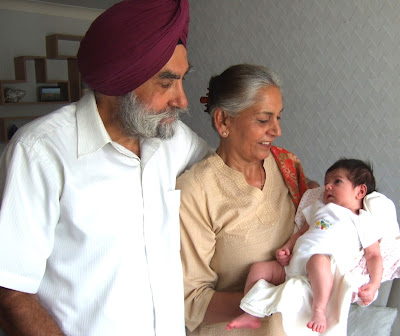 In his congratulatory e-mail on the birth of our grand-daughter on Sunday 7 July, the celebrated writer Dr I J Singh of New York wrote, “Congratulations! Do keep in mind that little girls have their fathers (and grandfathers) wrapped around their little finger from day one, and that's as it should be. I know for I speak from experience ....."
Youngest brother, Dya Singh of Australia wrote, " A baby is called a 'bundle of joy' - may she bring plenty of joy into your household. I have always been biased about girls anyway...."

I am not "biased" in any way, but cannot resist saying that daughters do have an edge over sons when it comes to affection for parents. We have two sons, both gave us much happiness as they grew up; but the wife has always complained, "If only we also had a daughter, she would have been such great company and help.....". My two "bhanji's" (late elder sister's daughters) remain close and ever affectionate, even though living away in the US and Canada.

As soon as the global family’s networks started buzzing on the arrival of the little new family member, grand parents on both sides (daadkay and nanakay) agreed that the morning's Sangat "Vaak" that day from Sri Guru Granth Sahib ji, should be the Vaak for naming the baby also. The Vaak started with the words "Sukh Nidhaan...". [Therefore, letter “S” for naming the baby]. My interpretation of these two Words “Sukh Nidhaan” is "Treasure of Happiness and Contentment" - because "sukh" is a peculiarly Panjabi word and I equate it with a state of contentment, bliss and harmony. 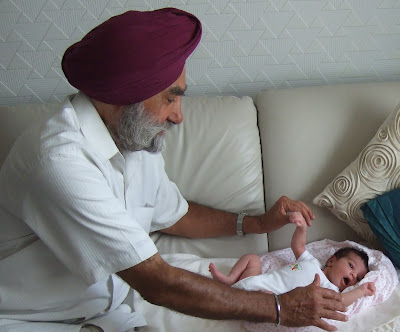 Our new arrival, little grand-daughter, is a reflection of "Sukh Nidhaan" and has brought great joy to the international family. The love of daughters for parents is forever.

I would like to share a story by S Sangat Singh of Malaysia, which illustrates the point that girls are always there for parents. (Part of his comment below my this article on Sikhchic) : "Here is something I had saved for such an occasion. On the first day of their marriage, a wife and husband decided and agreed not to open the door for anyone! On that day first, the husband's parents came to see them, they were behind the door. The husband and wife looked at each other, husband wanted to open the door, but since they had an agreement, he did not open the door; so his parents left. After a while the same day, the wife's parents came. The wife and the husband looked at each other and even though they had an agreement, the wife with tears in her eyes whispered, "I can't do this to my parents," and she opened the door. The husband did not say anything. Years passed and they had four boys and the fifth child was a girl. The father planned a very big party for the new born baby girl and he invited everyone over. Later that night his wife asked him what was the reason for such a big celebration for this baby, while there were none for the others! The husband simply replied, "Because she'll be the only one who will open the door for me!"

The last time I wrote about girls some years ago was a comment on an article in The Economic Times of India with the heading, "Girls Lesser Children of God" by Arun Maira. At about the same time, a concerned young Sikh from Birmingham (UK) invited me to review a short film about birth of girls in Indian families to give a Sikh view. I recall that the film was well directed and brought home the truth about prejudice against daughters in our society, much against the Guru’s teaching and trend in civilised societies.

Two of my related articles are about the status of women in Sikhism and the active role of women in Sikh tradition (see Sikh Missionary Society UK website links at footnote*).

As Prof Prabhjot Kaur wrote in a well researched article, “It has been said that the status accorded to women is the touchstone of the civilization of society.”

It is not my intention to go into the oft repeated and well rehearsed arguments trying to prove men-women equality in Sikhism, or to misquote Gurbani Shabad “Bhand jammiay bhand nimmiay.........So keo(n) manda aakhiyay jit jammay rajaan.” (“Why condemn women who conceive and give birth; to whom men are betrothed and married and who give birth to kings?”- GGS p.473) This Shabad is a response to those who condemn women; it is not to show “equality” of men and women.

A holistic view of Gurbani gives a clear head-start to women, who have the natural (psycho-physiological) attributes for achieving the purpose of this life. Men have to make that much extra effort to develop those qualities. The human soul is the “naar” (female) seeking union with the Creator Lord to attain the status of “sohagan” (happily married woman living in a state of bliss). The lonely soul in every human being – regardless of gender – is longing to become “sohagan” through union with “Kanth” the Husband, Creator Being. “Sohagan” remains in a state of harmonious bliss and equipoise (sehaj anand). The sohagan is the “first” in the human family as “Sabh parvaaray mahe shrest....”, the “batti sulakhni” with all those proverbial 32 qualities (see footnote **). The Lord’s attention (nadar) can only be sought by cultivating some of those qualities like humility, selfless service, sacrifice, compassion, inner beauty, and gentle nature.

A daughter brings deep spiritual joy to a Gursikh family. By contrast, boisterous and noisy celebrations announce the arrival of sons in Indian, and especially Punjabi, families. Frankly I find the loud wasteful parties quite boring and keep away from them. When patakas (fireworks) explode up to early morning in the neighbourhood in Southall (England), we know that “It is a boy !” We are also reminded that we remain “uncivilised”!

As she grows, through her many roles, especially as daughter and sister to her brothers, later as wife and mother, “she is able to change the destiny of a family.” Women, as mothers, can change the destinies of communities and nations.

To quote from an earlier article, “A woman must have own personality and must be bold and chivalrous when required. Otherwise, the situation described in Gurbani would arise when “Women have become submissive, while men have become tyrants.” (GGS p. 142) Sikh women like Mata Sundari ji (wife of the Tenth Guru, Guru Gobind Singh) who took a keen interest in Sikh polity after the Guru’s death, and Mata Bhago leading Sikh warriors in battle, have shown that women should be bold and take action when the situation arises.”

The brave Maharani Jinda(n) actually flung her skirt at the bickering Sikh generals who came to see her during the First Anglo-Sikh War (a symbolic gesture to wear it and sit at home, if they could not fight like men!).

The arrival of a baby girl in a Sikh family is a great blessing. The Guru smiles on the family. That is how we feel as grand parents. As we hold the little bundle of joy in our hands, we do feel that the Guru is smiling on the family. 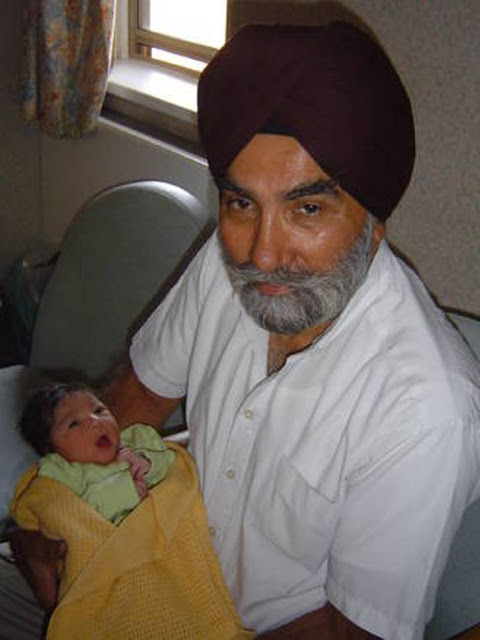 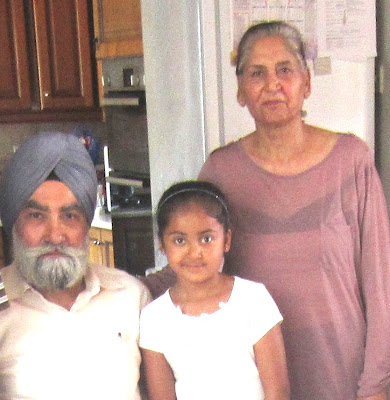 The arrival of a baby girl in a Sikh family is a great blessing. The Guru smiles on the family. That is how we feel as grand parents. As we hold the little bundle of joy in our hands, we do feel that the Guru is smiling on the family.

(Articles also on this blog.)