Below are two items:

All are welcome in the gurdwara. The Sangat is fairly representative of all shades of Sikhs and non-Sikhs, who have come to the Guru’s Darbar with faith in the Guru’s universal Message in their hearts, as they bow before the Jagat Guru.


However, few have ever argued that the management of gurdwaras should not be in the hands of those who, ideally, are Amritdhari Gursikhs i.e.those who have willingly accepted Sikh initiation to the Order of the Khalsa Panth, and practise the Sikh way of life, of constant God awareness, hones living and sharing with those in need.

Two types of seva (service with humility) is required of those who run Gurdwaras. First and foremost, it is the seva of Sri Guru Granth Sahib ji: the recitation of Gurbani and the seva of Kirtan and Katha. That means, the singing of Gurbani and, as necessary, explaining the Message of the Shabad (Guru’s Word) to the Sangat. Only a practising Gursikh scholar is capable of doing that, while visibly projecting the Guru given Sikh identity.

The second type of seva is the management of the Gurdwara, which, for reasons to do with Khalsa miri-piri (temporal-spiritual) ideology, institutions and Panthic identity, must remain in Gursikh hands.

However, the Sikhi miri-piri ideal and activism is not confined to gurdwaras only. It is also very much an extrovert twin track concept, which has been practised by the Khalsa Panth for centuries. It is interpreted into Khalsa socio-political activism extended from the gurdwara as the local focal point of Sikh life, to outside local, national and international activities and forums.

Gurdwara management in Gursikh hands is extended to participation in Panthic forums for the achievement of Panthic jathebandi (corporate) aims and objectives of a just and tolerant society.

To my mind, Sikh Council UK is an expression of Sangat representation, extended from local to national level.

It is the first next step to international level Sikh representation and revival of the Sarbat Khalsa tradition. Recent challenges to Sikh identity also pose a challenge to gurdwara managements to revive the spirit of Sarbat Khalsa. To quote from own article in the August 2012 issue of The Sikh Review, “Sarbat Khalsa is an expression of Panthic solidarity” which is translated into an uniting decision making process at global Panthic level.

Due to the dedicated voluntary seva of some individuals, Sangat (grassroots) based organisations have achieved much over the years. However, recent events have shown that these organisations, no matter how ably led, cannot resolve the issues, concerns and challenges faced by Sikh ideology and identity. Only gurdwaras, represented on a national level platform, can make an impact on governments and agencies.

UK Sikhs have the critical mass to provide a lead in the diaspora. The only way to ensure that all viewpoints are represented on the Sikh Council UK and the constitution of the General Assembly and the Executive Committee, is to join in and not remain outside. Sikh Council UK is the business of every gurdwara and Sikh organisation in the UK.

The Council strengthens the role of well established Sikh organisations by providing them a common reference point and a common platform. The Council’s own role must remain above organisation/jathebandi agendas and biases, while pushing in a common Panthic direction, so that Sikh presence, presentation and negotiating position in the UK and in Europe is strengthened.

If the Council is to provide a platform for well established organisations, then it is clear that it cannot start taking over their activities or diverse roles.

The Council cannot behave like yet another “jathebandi” or an extension of another existing jathebandi. Its role will remain supportive, encouraging and advisory in areas of Sikh identity, religious matters, education, preservation and promotion of heritage (including Anglo-Sikh heritage), social and cultural advancement, welfare including Sikh aid, and human rights.

Excellent work is already being done in most of these areas by many existing organisations. Nevertheless, with the Sikh future in mind, the Council should promote or even undertake those neglected activities, which gurdwaras and current organisations are unable to pursue.

The Council remains inviting to all. The Council does not interfere with the work of others. However, only affiliated organisations subscribing to uniting principles of the Council, can claim Sikh Council UK “support” in public announcements and “Press releases”. That is not fair and gives the impression of an organization claiming the same or even higher standing than an umbrella body like the Sikh Council UK, which is shown in a “supporting” role!

Sikh unity needs a more mature approach. The hope is that all organizations would sit around one table and agree common strategy to be then able to claim Sikh Council support in any “Press Release”, which, in any case, should be joint, on major Sikh issues. Otherwise claims should be limited to own achievements only.

A Sikh scholar wrote, “Like a new born infant I always felt that the first phase of the Sikh Council UK.would be the most challenging and all credit to all the gursikhs that are meeting the challenge with humility, courage and intellect in the true Sikhi tradition.” (Dr Gurnam Singh of UK)

I agree with you wholeheartedly Doctor Sahib!


Dear Gurmukh Singh ji and Others

As usual it is wonderful to read such words of wisdom. Sikh Council UK (SCUK) is, I believe, coming of age fast and will go from strength to strength. I think both the London Olympics and the US shootings have posed major challenges for SCUK - and other active Sikh bodies such as United Sikhs - and it is pleasing to see them come though with flying colours. Like a new born infant I always felt that the first phase of the SCUK's short life would be the most challenging and all credit to all the gursikhs that are meeting the challenge with humility, courage and intellect in the true Sikhi tradition.

That said, I do think the coming years will not be easy, not least because we have raised expectations amongst both the Sikhs and the wider authorities about our ability to provide coherent professional representation for Sikhs at the highest level possible. Along with the many practical challenges, I feel biggest challenge facing us now is to have a paradigm shift in which we break free from the Panjab centric thought processes when thinking about the future of Sikhi. By this I do not mean we should abandon the Panjab, but that we see the problems in the Panjab in the context of the socio, cultural and political environment of India. For example, when we talk about the drugs problem we seem to think that this is simply due to the your going away from religion. Even if this were the case, there is very little evidence that I have seen to show the causal link. I would say that the genesis of this and other problems is much more complex linked to globalisatiion of culture and finance, the broader Indian culture, rapid urbanisation in India and demise of traditional forms of social solidarity leading to a state of psychological confusion, what sociologists have called anomie.

Likewise, I feel the way we should address the Khalistan issue, which has so far been so divisive amongst the Sikhs, is to take a neutral stance on it, but to offer broad support for Panjabi Sikhs or Indians in other states for that matter that want to exercise their democratic right to demand their own country. state or autonomous region. The reality is that even if Khalistan is created, then its primary purpose will be to serve the people who live there, and that includes Sikhs and non Sikhs. Again, just as we have a devolution debate in the UK then let the Indians have their own discussion about their future as a unified nation or a confederation of nations of whatever.

So, what we need is political maturity and we need to move away from the village mentality that is so outdated. We need to break free of both the orientalist colonialist mind set and its mirror image which implies that everything 'western' is 'bad' or 'dirty' and by default everything 'non-western' or Panjabi or Indian is 'good' or 'pure'. We need to purge ourselves of the racist mindsets that we have allowed through our uncritical adherence to what is essentially feudalistic Panjabi culture.

If there is one thing that the London Olympics has taught me it is that the British still reign supreme when it comes to organisation and in reproducing British Identity. The fact that India, a country with a population of over 1 billion people has only managed to achieve a paltry 5 medals is I believe a testament to the self delusional corrupt mentality that many in power have there.

The fact is that Indian, and Panjabi culture in particular, is deeply problematic and, astonishingly, this is something that Guru Nanak identified 500 years ago. I think the reaction of compassion and care towards the Sikh community that the US public and the UP state to the shooting in Milwaukee contrasts so vividly with the mindless protests held by some RSS inspired Sikhs in Delhi. SO, I feel we have to stop giving the importance we do to Sikh leaders from India, not because we should be unkind to people at a human level but because there is very little that these people can do for us. They are not part of the solution but part of the problem!

Last, on the issue of revising the Sarbat Khalsa tradition, you will be pleased to know that the Oxford University event that SCUK organised in conjunction with the Sikh Think Tank and SikhRI is to be broadcast this Thursday evening on Sikh Channel [16.08.12], so please spread the word.

I personally think it was a historic event and it will be interesting to see what kind of response we get to the broadcast.

(In progress)
E-mail me if you see a familiar face from the past  sewauk2005@yahoo.co.uk
Pass on this webpage to Malaysian friends & publications. 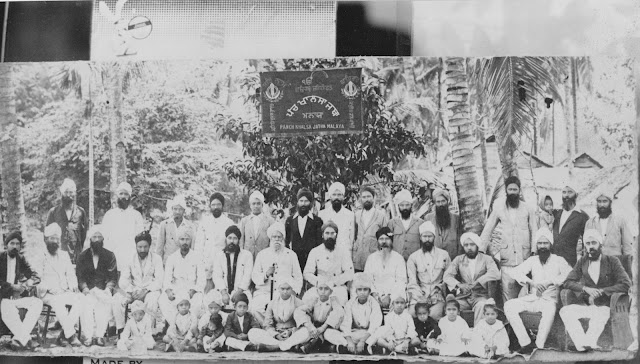 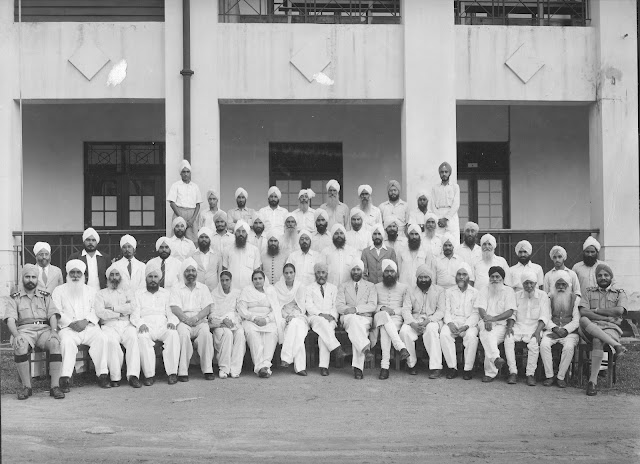 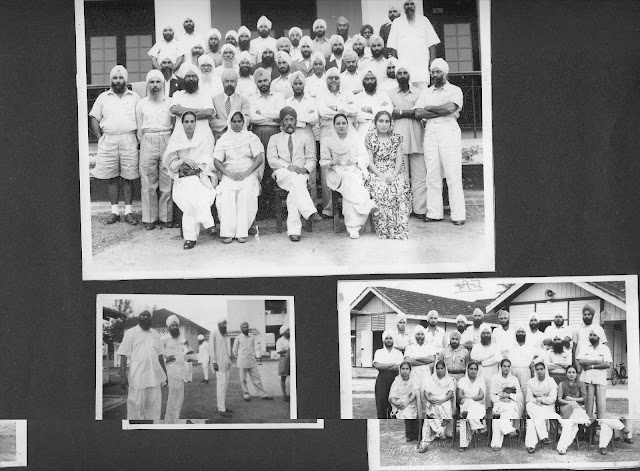 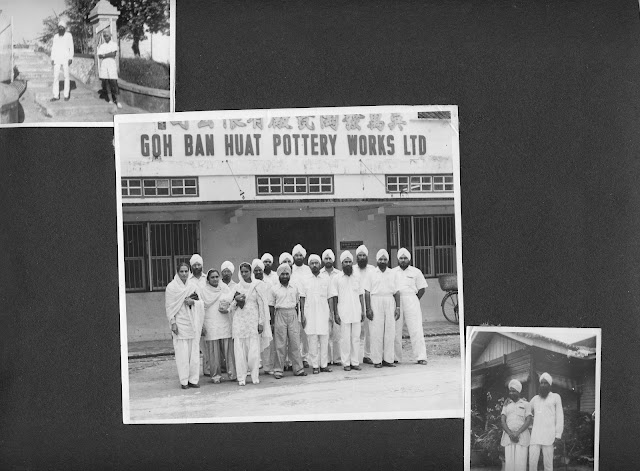 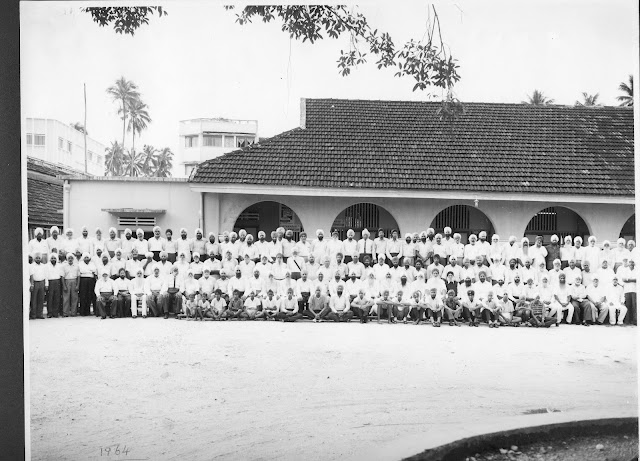 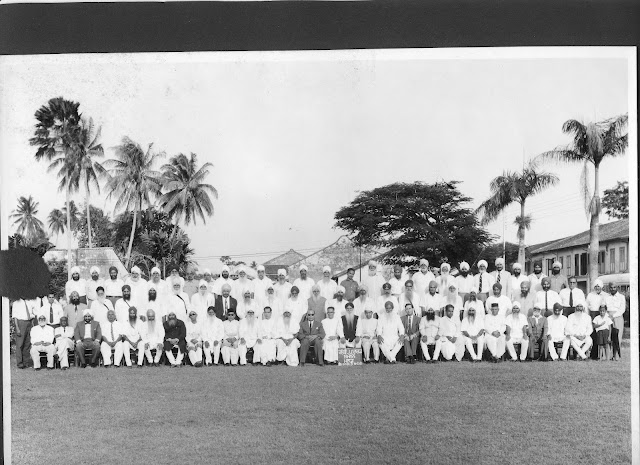 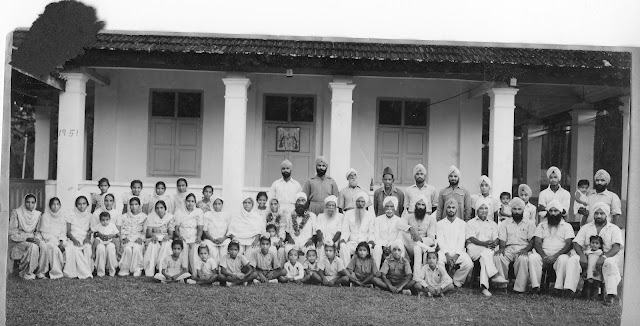 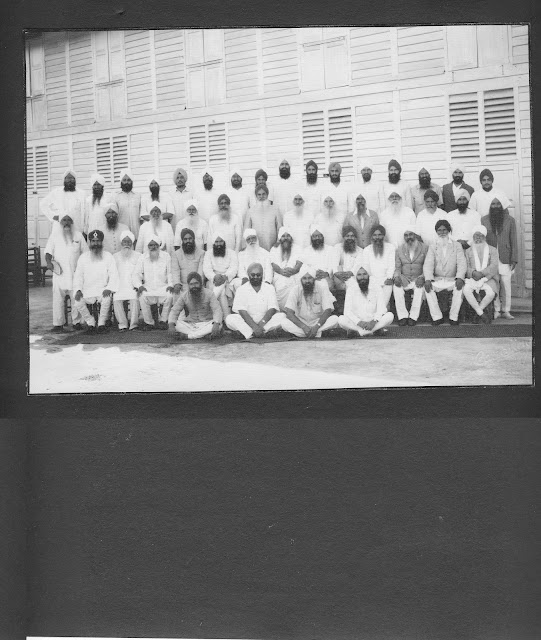 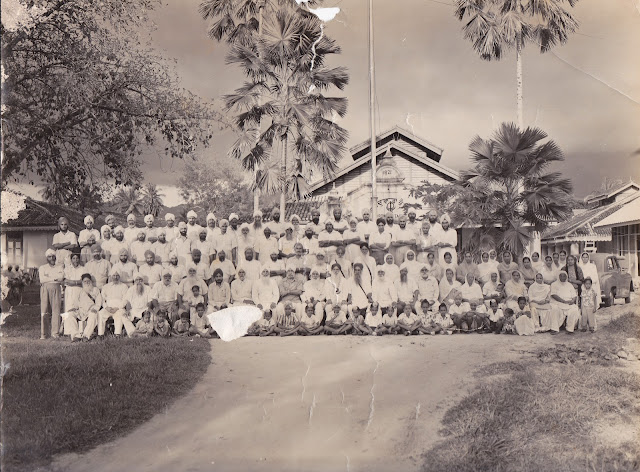 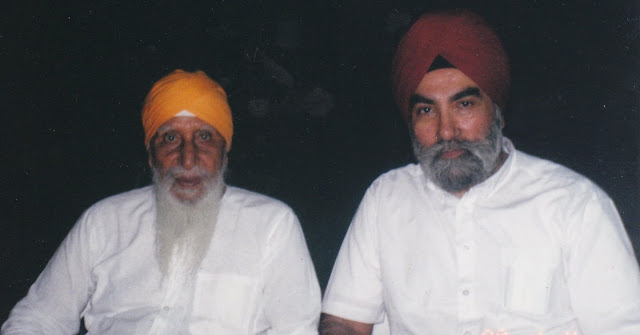 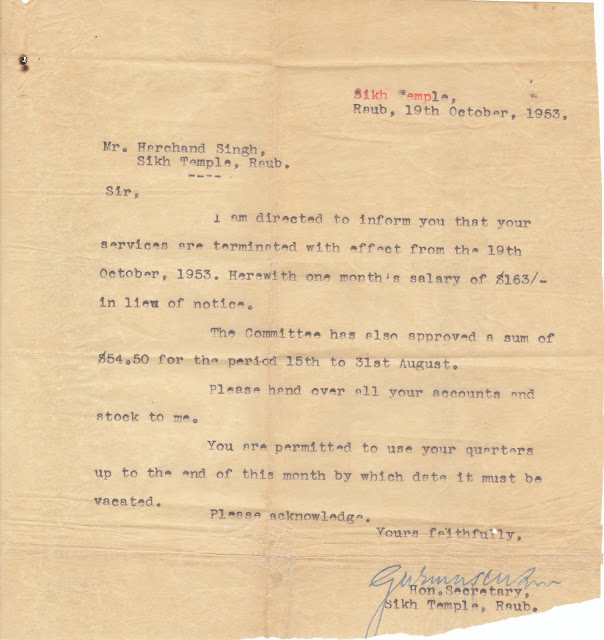 "Directed by" whom Gurdwara Secretary Sahib or Pardhan Sahib? Not the Sangat! 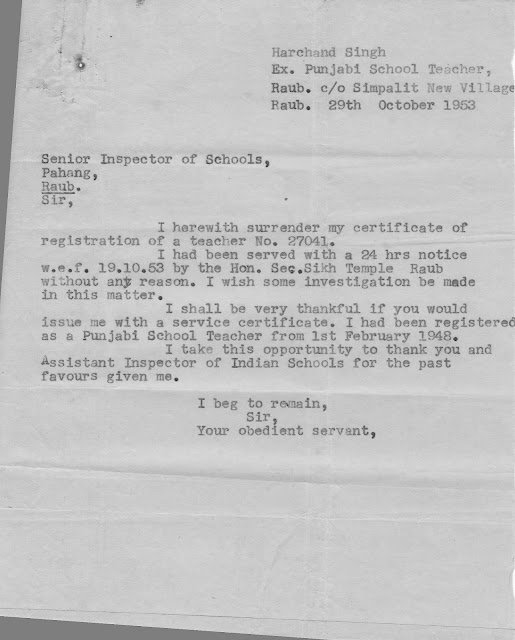 No reason given. Maybe, sacked for disobedience ? 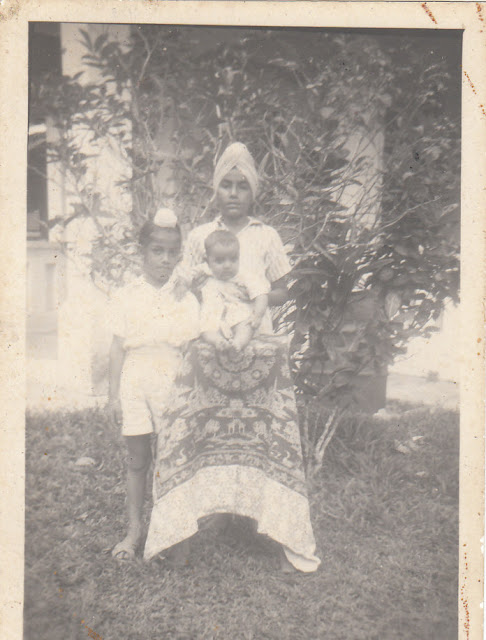 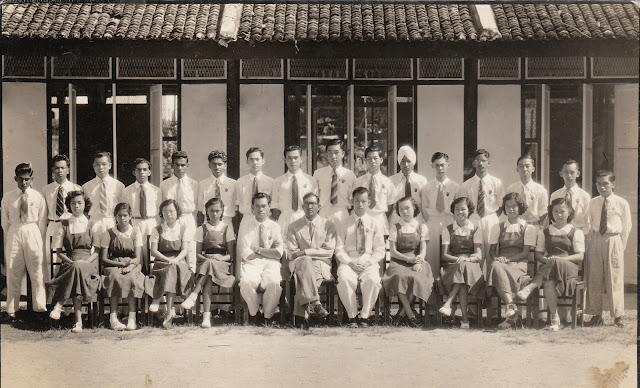 Prefects Board (Mahmood School, Raub) 20.09.53 - My last photo at Raub: Schooling interrupted when Bapu ji sacked a month later on 19.10.1953 as Giani/Panjabi Teacher after serving at Panjabi school and gurdwara for 6 years.

Moved to Klang where Bapu ji worked as bus conductor. Family of 5 lived in a small one room wooden hut, where prominent Sikh scholars  including editors of "Malaya Samachaar" (KL) and "Navjeevan" used to drop in to meet Bapu ji. Continued with Kirtan seva at Klang Gurdwara.  The most challenging years for the family. My first article in Panjabi in Malaya Samachar headed "Laik Sajjan" that year, questioned what sort of "Laik Sajjan" (with reference to Bapu ji's experience, and advertisements for "Qualified Giani/Granthis"), the new generation Gurdwara managers were looking for?
Those years saw the end of traditional scholar kathakaar/kirtania Granthis. 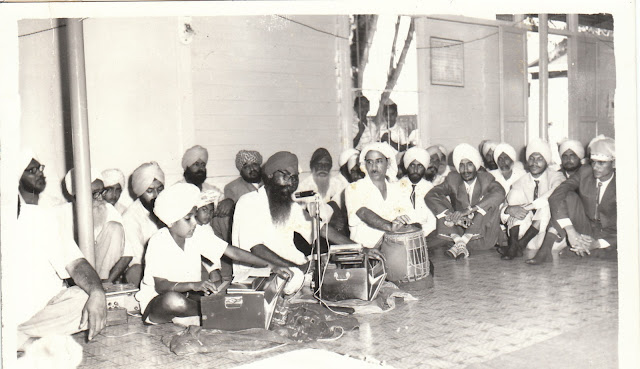 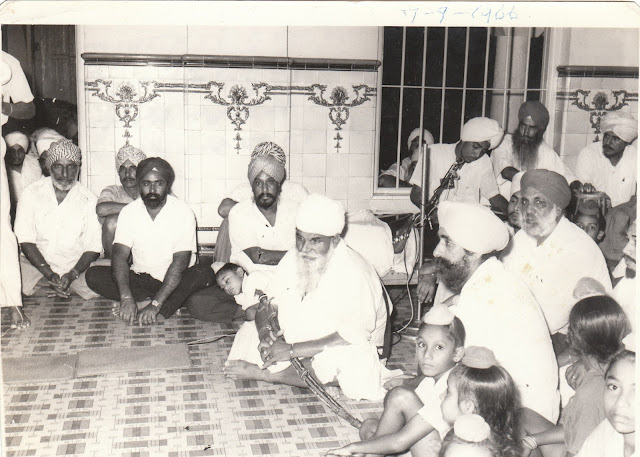 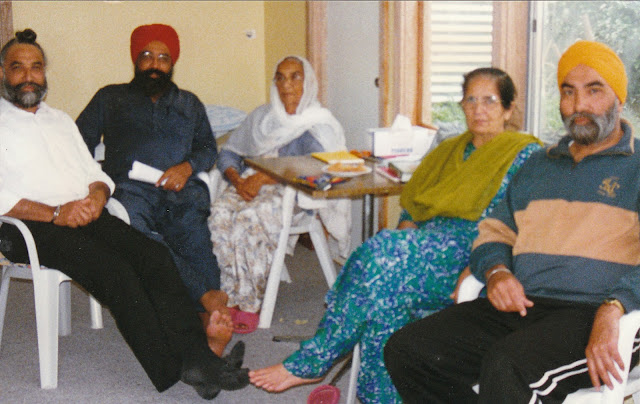 Items may be published with acknowledgement.