For today’s topic, "Saints, Prophets, Leaders, and Enlightened Beings", I would like to start with a quotation from the hymns of Guru Nanak, the Founder of Sikh religion:

"O’Nanak, the True Guru (i.e. Enlightener or Prophet-teacher) is one who unites all."
(Guru Granth Sahib, Sikh holy Scripture page 72)

According to Sikh thought, that is the main criterion for truly enlightened beings:
they bring all humankind together.

A prophet, in the Sikh tradition, is the Guru, who guides by divine inspiration.
The inspiration is through the received Word, or Shabad.

Sikhism calls this divine inspiration the Guru or Satguru, the True Guru.
Says Guru Nanak:
“Even if there be hundreds of moons and thousands of suns, there will still be darkness without the Guru.” (GGS p.463)

Therefore, the word Guru also means one, who removes the darkness of ignorance, and illuminates the path of righteous conduct. In this sense, the Guru is equated to divine Light or Jote. The Guru is also, the interpreter through whom the divine will – Hukm or Rza - is expressed.

The Sikh belief is that the same Divine Guru Light passed through 10 human forms, from Guru Nanak, the Founder of Sikh faith to the 10th Master, Guru Gobind Singh, over a period of over 200 years from 1469 to 1708. That light now resides in Guru Granth Sahib, the Sikh Scriptures, compiled by the Guru personalities themselves.

Each Guru personality taught by own example.

Of the ten Guru persons, two gave their lives for speaking the truth, and for treading the path of righteous conduct. This is leadership by example.
The 9th Guru Tegh Bahadur, gave his life for the religious freedom of others while saving another religion from extinction.

In the Sikh religious tradition, the Guru or the prophet-teacher, walks the path, and invites others to walk with him. He enables others to learn. The word for learning is “sikh” – a verb as well as a noun.
That is the reason why we are called “Sikhs”, those who are prepared to learn from the Guru and through own life experience.

Briefly about the word "saint": The Punjabi word for “saint” is “sant” derived from Sankrit.
Sant means “Shaant”, that is “calm” or “tranquil”
Sant refers to one who remains in a state of calmness and equipoise. It also means one who has conquered his or her five vices:  lust, anger, self-centred vanity, excessive attachment and greed.

We believe that a Guru, Prophet, an enlightened God-being, or a Saint can pray for the wellbeing of all, and can show the path to self discovery and inner enlightenment.
However, a very interesting point and worthy of note is that the concept of a God-being [Guru or Prophet] interceding or intervening on behalf of people on earth is missing in Sikh thought.

We are all responsible for our own destiny.
What we sow, so shall we reap.

However, the True Guru can break this cycle by enabling a human being to discover the inner self, which is equated to the Divine Spark, the Guru-Light, the Jote, which resides in every human being, regardless of gender or race.

Over the ages, saints, prophets and good leaders have guided the human society to face the challenges of this human life.

On the question of a leader, there are many passages in Guru Granth Sahib, and other Sikh religious texts where the qualities needed in rulers and leaders of men are well defined. .
If I may quote some of them:

Only one well qualified to lead should be a leader.

The real test of a good leader is that no one inflicts pain on another under his or her leadership.
A leader should have good advisers and must not act alone, or for selfish reasons.
A good leader should be just and impartial and act according to Dharam i.e be able to decide what is the right direction to take under any given circumstance.

Thus for the Sikhs “Society and religion go together” .
The world needs good leadership and guidance.

More so in the run-away material consumerism of today, which is leading to yet more lust, greed, discord, social problems, rich/poor divide and irresponsible attitudes to world problems like pollution and nuclear proliferation.

Guru or Prophet-teacher unites all, is the enlightener and removes the darkness of ignorance, is the interpreter of Divine Will or Rza, he shows and walks the path and invites his Sikh to walk with him.

Guru shows the path, prays for the well being of all, but does not intercede.

A saint or sant remains in a state of calmness and equipoise and is one who has conquered his or her five vices: lust, anger, self-centred vanity, excessive attachment and greed. 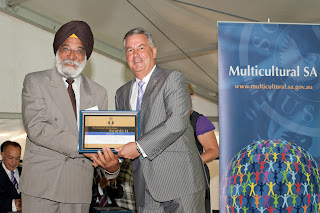