"The waters may have rose, but your spirit has risen higher", banner on Parrett River, Burrow Bridge, Sommerset. 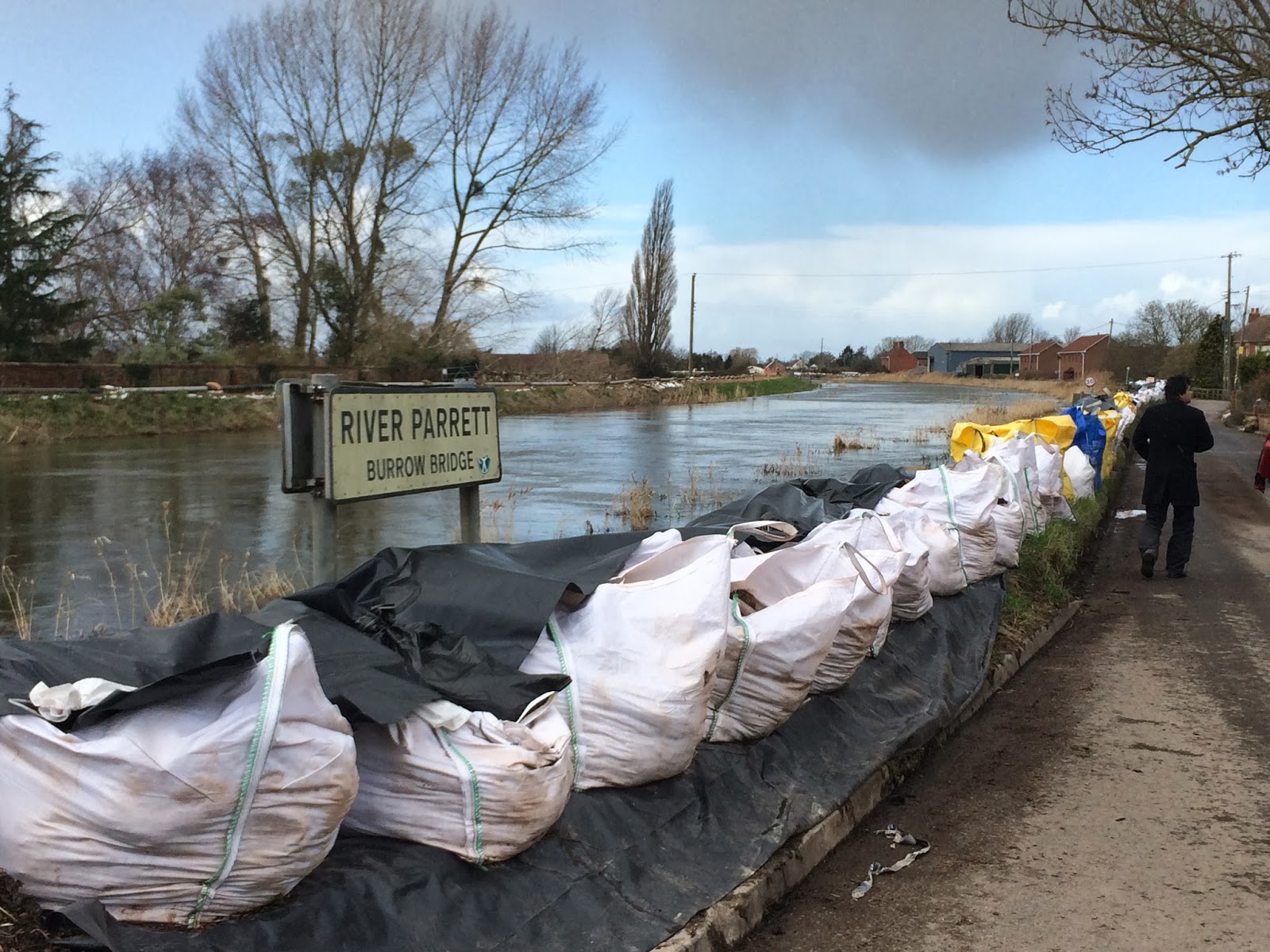 Message in response to post from Ravinder Singh (Chief Executive of Khalsa Aid) on "Sikh News Discussion" of 28 February 2014:

"The waters may have rose, but your spirits have risen higher." (banner on River Parrett, Burrow Bridge, Sommerset ( see photo)

The flood water is still there at Burrow Bridge at dangerously high level (see photos taken on 27th February)
"Raaj karega Khalsa !", but how ?

Many from the local community came to greet us warmly on seeing Ravinder Singh and his Khalsa Aid colleague "Billa" Singh. Many told me that, they were crying out for help when all emergencies had failed. Khalsa Aid responded on hearing the appeals on radio, and the burly "sevadars" arrived with a truck full of supplies to help. The locals described them as "giants" who defied the weather to work tirelessly day and night in pouring rain, piling up sand bags on the river bank (photo).

Please bear in mind that the attached photos of the receding water were taken only a couple of days ago.

Khalsa aid was given peaktime TV coverage during the floods period, which according to the local people, was the only community aid charity which responded, while the government services remained in utter chaos.

Truly, only seva in the field in true Sikhi spirit will continue to bring our next generations closer to other communities.

( As we were talking to Charles Payton, the church warden, and his wife (ex Air India hostess) sitting around a table drinking coffee at the local Pub "HQ" for the services, UK IP's Nigel Farage (anti-immigration), also visiting and well aware of massive Khalsa Aid popularity, made it a point to come over to shake hands - Ravinder Singh was not too keen about earlier press photos which captured him and Nigel in the same shot ! It is only afterwards that I realised who he was.) 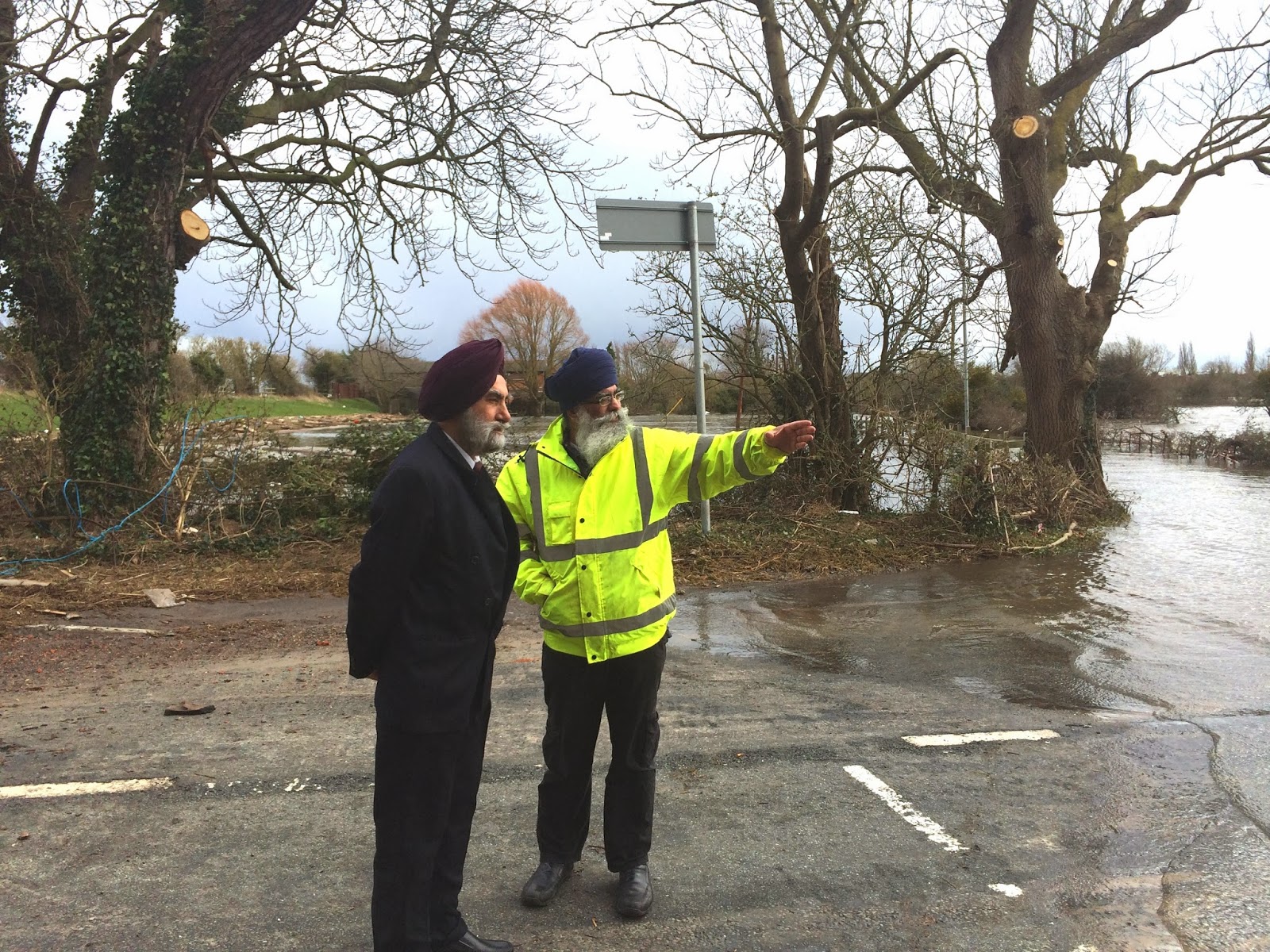 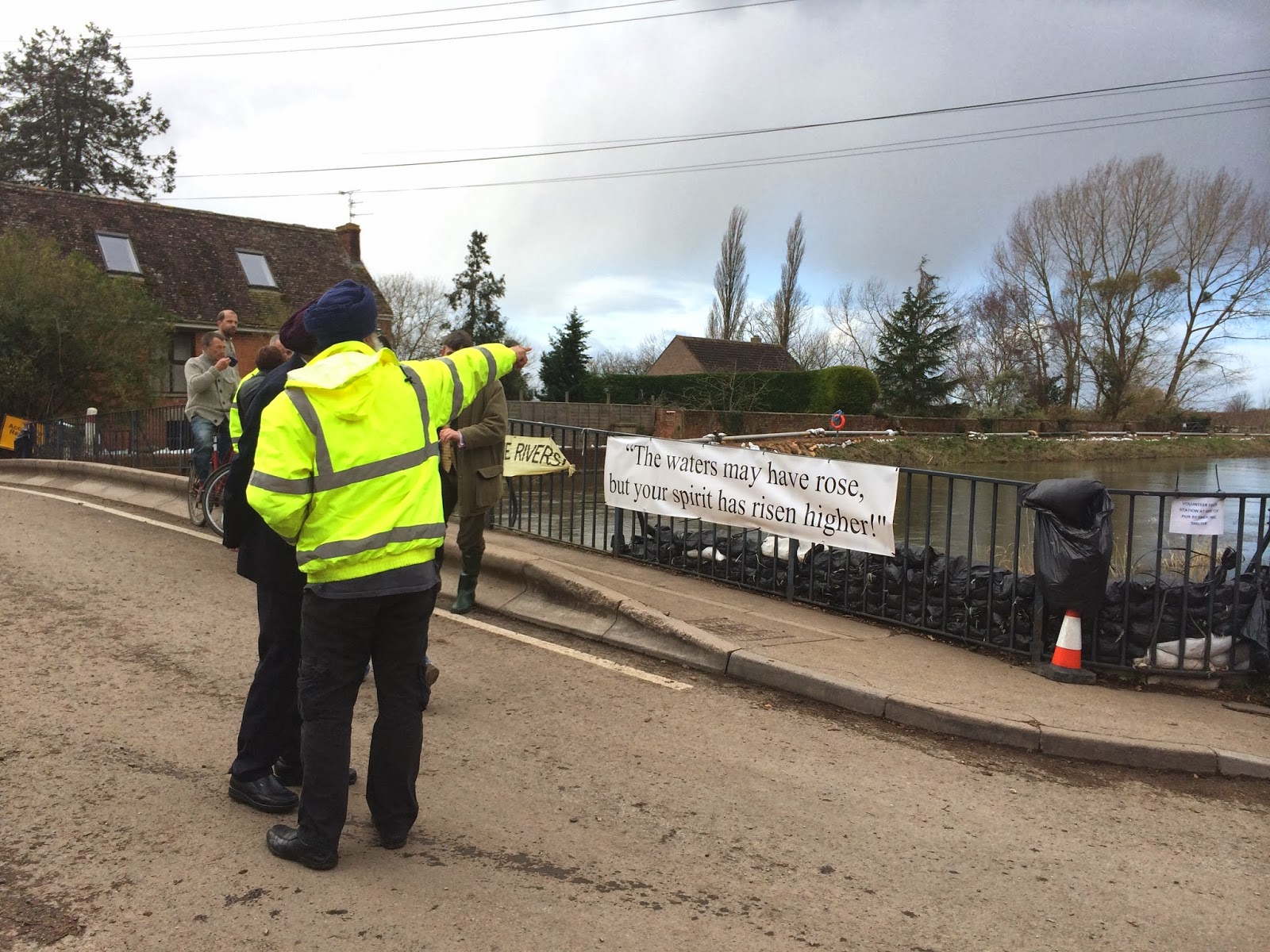 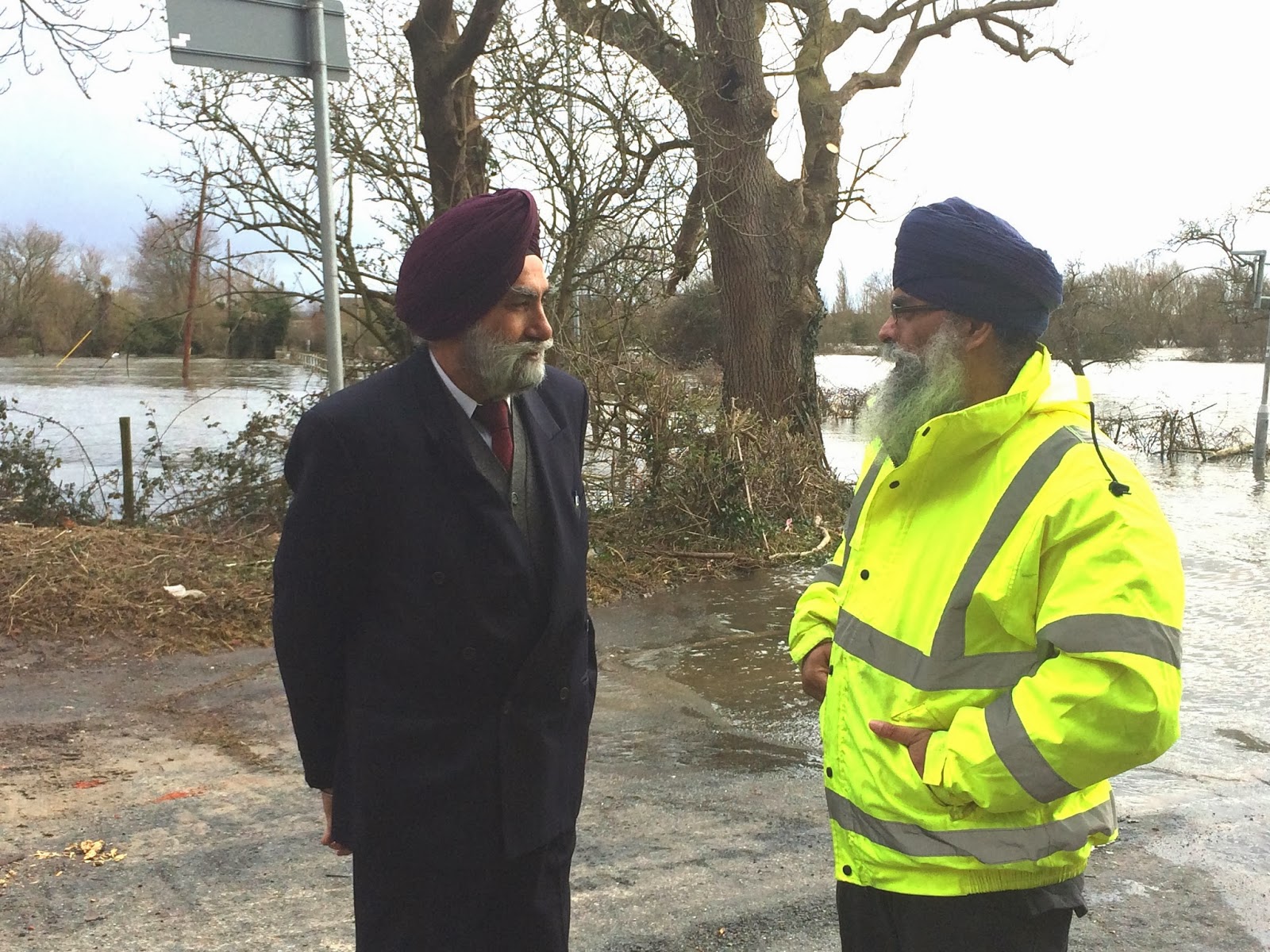 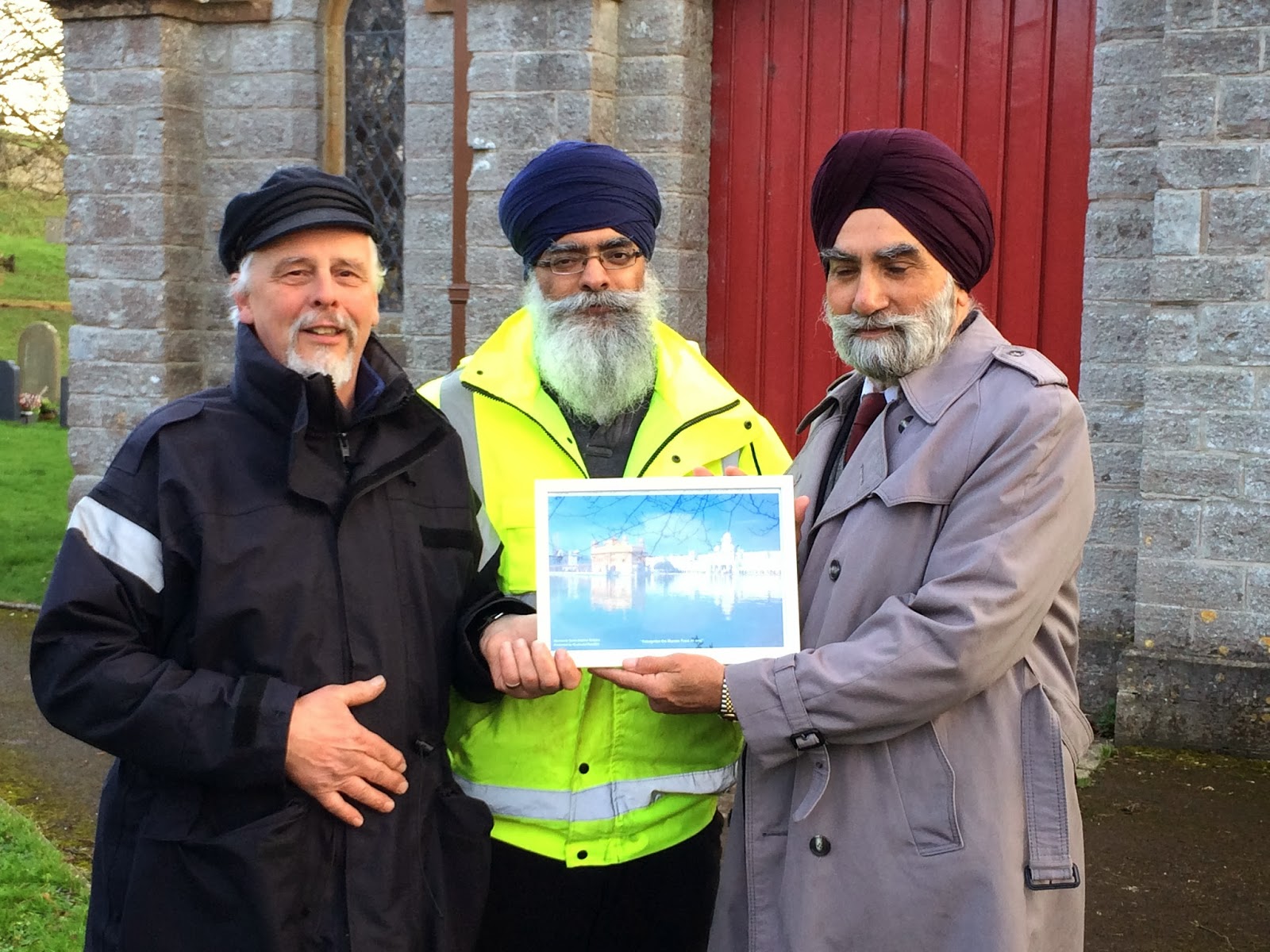 Somerset yesterday. Khalsa Aid ( KA ) was the only NGO in Burrowbridge when the floods were at their most dangerous levels. KA was working very closely with the local community group FLAG. The local community has been very welcoming to the Sikh volunteers and has even provided accommodation in their homes for the volunteers.

Sardar Gurmukh Singh was invited by the CEO of Khalsa Aid Ravinder Singh to visit Burrowbridge and to present a framed print of Harmandir Sahib to the local community. The local church warden, Mr Charles Payton requested " something from the Sikhs" as a momento for the village , he received the special gift and was overwhelmed by it.

" What a wonderful community! I am so pleased that Khalsa Aid was involved in assisting the community in its hour of need. I sincerely hope this will be the beginning of a great friendship among our communities." Sardar Gurmukh Singh. 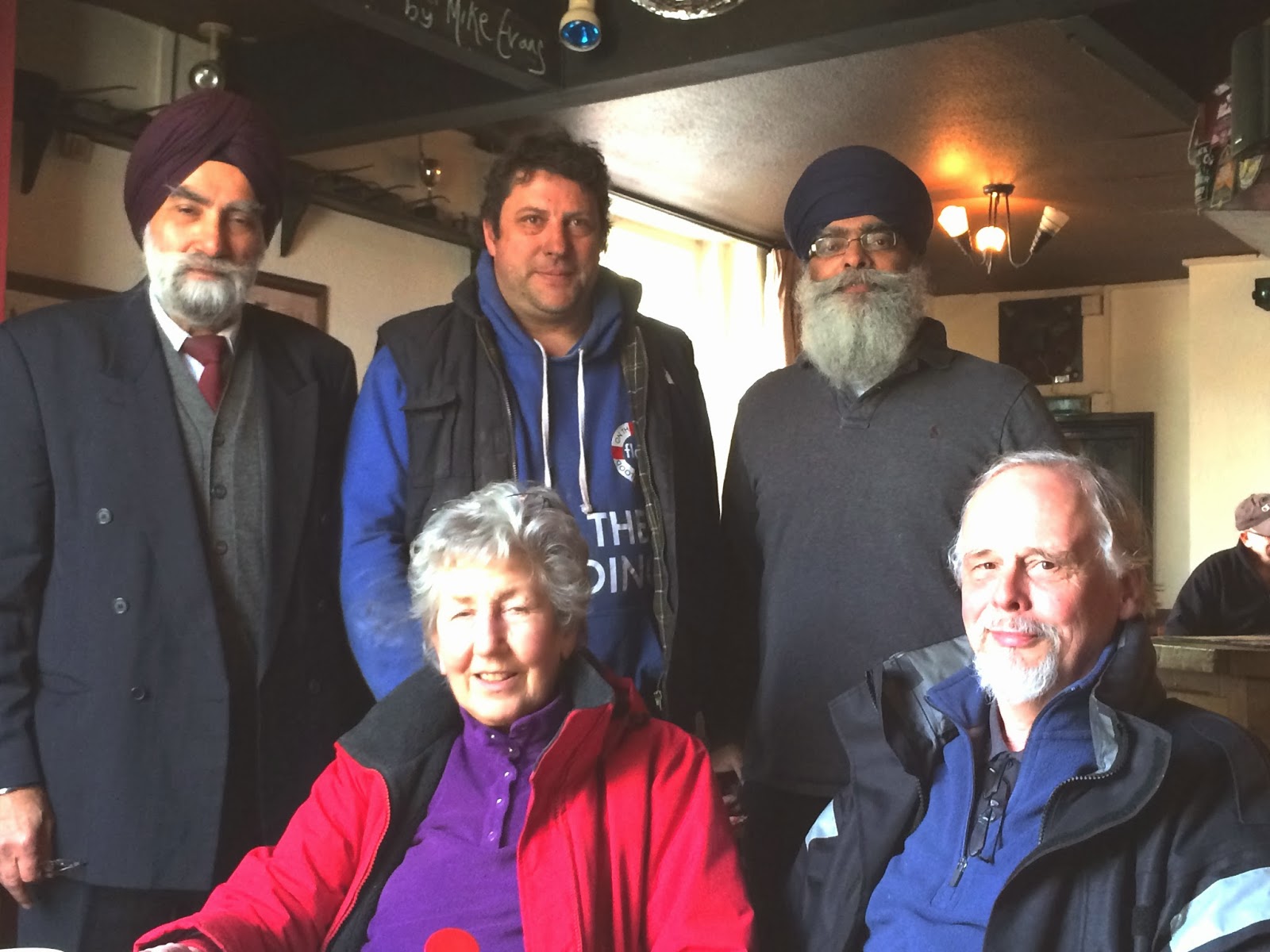