Sikhs Represented at Australia Day Multifaith Celebration
I thought it was important to write “home” to my 700,000 fellow Sikh British about a remote Australian Sikh community ensuring “recognition” of Sikh identity at national celebrations.


According to the event brochure, “The Australia Day Multifaith Celebration is an act of recognition.” Well, you can only be recognised if you show your own Sikh identity at such occasions.
It was a spiritually exhilarating experience for me, to attend Australia Day Multifaith Celebration organised by The Order of Australia Association at Adelaide University in South Australia, on 26 January, 2012.

Three full identity Sikh Australians stood out on the stage, amongst other faith representatives, as Government and civic representatives, including His Excellency Rear Admiral Kevin Scarce, the Governor of South Australia, looked on from the front rows with appreciation.

The theme, “Together in Peace” was introduced by the Governor following an introductory “Act of Reconciliation” whereby an Elder of the Kaurna people (aboriginal South Australians) offered eucalyptus leaves, a traditional symbol of healing. These people have suffered persecution to near extinction, following the arrival of the British and Europeans who pursued racist policies, now in the process of being reversed.

The national anthem, “Australians all let us rejoice…” was sung and then followed a most moving presentation of faith “symbols” portraying the essence of “religion” - to unite.

Each faith representative walked the length of the hall with own religious “symbol” to soft background music of that religion, while a “reader” read out the message signified by the symbol. The Sikh presentation of the “Khanda” (insignia) was perhaps most prominent due to visible Sikh identity and the temporal-spiritual (miri-piri) symbolism of the “Khanda”. Giani Kuldeep Singh (Granthi Sahib, Adelaide Gurdwara), S. Balwant Singh, President of Sikh Society, South Australia, and S. Harpal Singh Sandhu took part.

To Giani ji’s melodious chant in the background in praise of the Khanda, S. Balwant Singh, walked gracefully up to the stage carrying the Khanda, and handed it to Branch Chairperson, Mrs Elaine Brussenschutt OAM, to be placed alongside other faith symbols. From the stage, S. Harpal Singh Sandhu (Amritdhari young Khalsa) spoke eloquently about the spiritual significance of the double-edged Khanda, the Chakkar and the two Kirpaans. In effect that “Khanda” is the Sikh insignia which appears on the Sikh flag. It constitutes three symbols in one. The name is derived from the central symbol, KHANDA, a double-edged sword, signifying Sikh belief in One Creator of all, Who is All Powerful in this and the next world. Next the CHAKKAR: a circular shape which signifies that the Creator has no beginning and no end. On the outside are the two KIRPAANS (Swords), signifying the temporal and spiritual (miri-miri) aspects of (Sikh) life in active service of the Creator Being.

Most impressive teamwork organised by S. Baldev Singh Dhaliwal JP, of Sikh Education, Welfare & Advancement (SEWA) network, who has extensive work experience with diverse communities, in the famous Riverland fruit growing district of South Australia. He was unable to attend personally but had left a message with the organiser that I would be attending, adding jokingly, “as representative from the mother country”! A risky thing to say, seeing that “pommies” are not very popular with some Australians.

Each faith had only about one minute to make the point! The occasion showed how much can be achieved in that time in communicating the essence of a religion – symbolically and in a few words! (Something for our Gurdwara parbandhaks and presenters to learn from.) 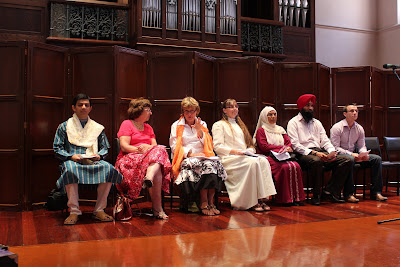 Mrs Elaine Brussenschutt OAM, Chairperson of The Order of Australia Association, South Australia Branch, led the recitation for recipients of Australian and Imperial Awards. To quote the part which captured the mood,

“Inspire all of us and give us the strength to continue this service to our communities and our care for the needs of those less fortunate than us. Give us the strength and the will to work for a better world and to provide opportunities for people of the world to achieve and enjoy freedom of spirit, security and the right to worship and live as their beliefs and cultures direct.” 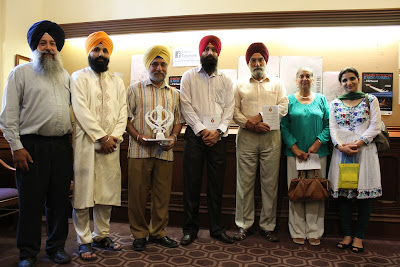 (Photos by Karandeep Singh of Adelaide)
The remote Sikh communities here have opportunities to show their visible identity presence at national events, which we missed in the earlier days of our arrival in the UK and other countries. Today we are paying a heavy price as a result, as we face increasing challenges to Sikh identity in the West, also the heading of a paper, this author had to collate recently, to brief those who would take up such challenges to assert Sikh religious rights before law courts.

As I heard the short, precisely worded messages of “unity in diversity”, and formal “recognition” of diverse religio-cultural identities at this graceful interfaith event, I felt that, surely, the "world citizen" ideal is at work here in this beautiful and wonderful country, Australia.

Articles may be published with acknowledgement 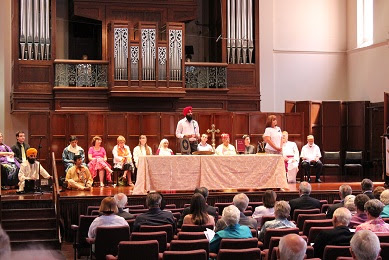