Mission & Vision of a Neurosurgeon ﻿﻿

Adelaide is called the City of Churches. The gurdwara, located at the main entrance to the city from the west, on the highway from Melbourne, has visibly added to the diversity of places of worship in this, one of the most beautiful and well planned, cities in the world.

An interesting feature of this gurdwara is that the sangat hall rests on a massive rock reminding one of Dhaol dharam – the bull of dharma in Japji Sahib. It is an old heritage listed building built (1846) within 10 years of the founding of Adelaide City in 1836.
﻿﻿﻿﻿﻿ ﻿﻿﻿ ﻿﻿ ﻿﻿ 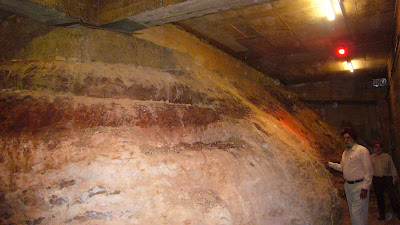 supported by the Rock of "Dhaol Dharam" !

Re-location of Adelaide’s first Gurdwara to this heritage site a few years ago, realised the vision of a Sikh neurosurgeon, Dr Swaran Singh Khera, of a 21st century gurdwara complete with modern facilities. Some of these are shown in the pictures below: 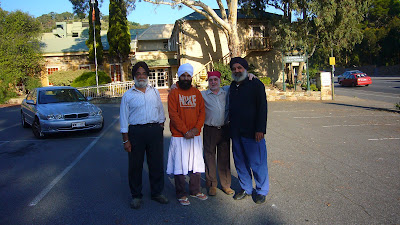 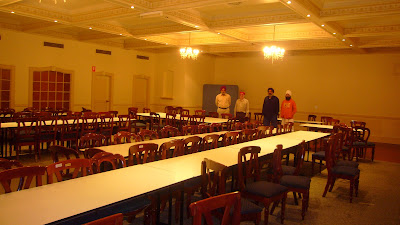 Seminar hall which can also be used as second Langar hall. 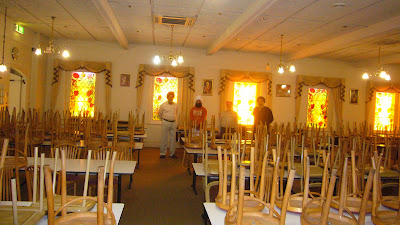 Langar hall (Yes ! With chairs; but there is also facility for Pangat on floor at one end.) 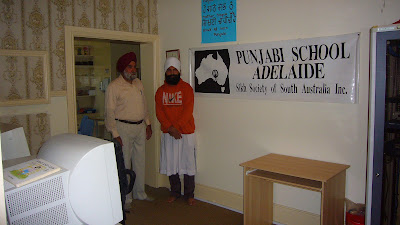 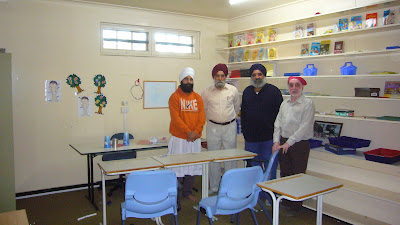 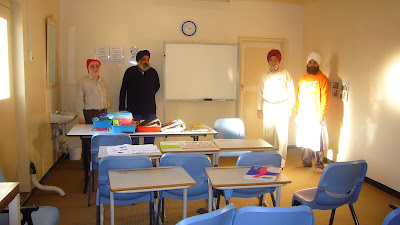 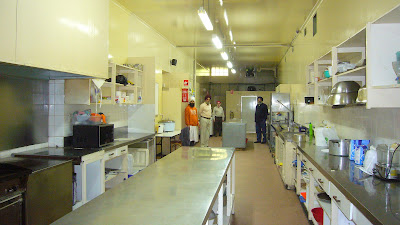 Above and below:  Modern spotless kitchen 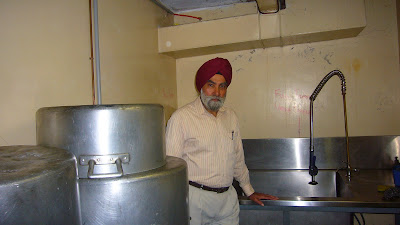 Below: Unlike most Gurdwaras,  Giani ji "Babay da Vazir" is not forgotten ! 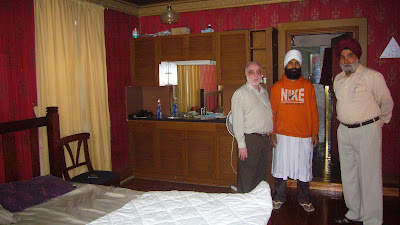 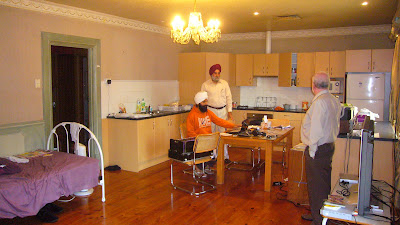 A large kitchen area with computer working facility and a spare bed. 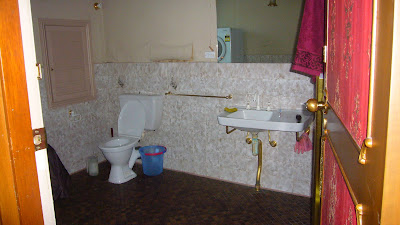 Clean spacious bathroom (I insisted on this photo being taken!) 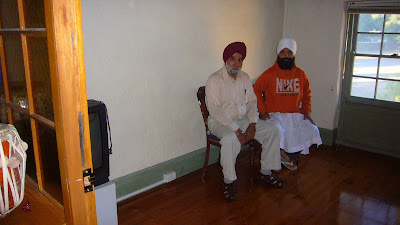 Dr Khera may not be a religious missionary but his concern is for the image of the Sikh community of Adelaide - not the religious aspects of Sikhism - his knowledge of which, at his own admission, is limited. Nevertheless, that does not stop him from locking horns with "orthodox" grey beards including myself. "Why have a golak in front of the Guru Granth Sahib ?" he argues, "Are we paying respects to the money in the golak or are we paying our respects to the Guru? The passage to the Guru should not be cluttered with golaks, unnecessary flowers, pictures of our 'gurus' and swords and other weapons etc." One may not agree with him on all aspects of his common sense approach, but he is a robust social activist in the true Sikhi spirit of chardhi kalla.

As a "Sikh Centre", the gurdwara caters for the spiritual and socio-cultural needs of the local Sikh community, while remaining warmly open to all. Programmes in the gurdwara service are planned in advance and punctuality is enforced. The youngish Gurdwara Giani, Kuldip Singh, is required to prepare a pointed bilingual English/ Punjabi service every Sunday with multimedia aids and supported by students of Gurbani. Elderly retired teacher, Master Joginder Singh (ex-Malaysia), gave initial Gurbani guidance now continued by volunteers like retired teacher Ajmer Singh Randhava, lawyer Bahal Singh and others including some ladies.

All sangat participate in singing Shabads in melodious spirituality, a tradition introduced by Dya Singh of Australia, one of the founders of the gurdwara. Dr Harbans Singh Gill accompanies Bhai Kuldip Singh – a proficient Kirtania-kathakar – on the harmonium. My namesake, Gurmukh Singh, a dedicated sevadar, senior motor mechanic and car racing enthusiast, is roped in as spare tabla player. There are other youngish Gursikh Kirtanias and Paatthis.  The sound system for kirtan was specially commissioned. Observed Dya Singh, “Kirtan must sound good - not sound like an intercom system on a railway platform!” Inspired by those like Bibi Balbir Kaur (gurdwara secretary, and wife of recent Hind Ratan awardee, Dr Bhagwant Singh), women lead by doing dedicated seva.

Gurdwara presidents, like the current incumbent, Balwant Singh, serve in turn. The team spirit and seva bhavna of all is most remarkable and refreshing. Nevertheless, my own observation is that the gurdwara is mainly run by well educated ladies. I wonder what the anti-Bibian-di-seva jathedars at Darbar Sahib would say about that!

Quite significantly, this “modern” gurdwara is located at a cross roads junction which reminds one of where Sikhi tradition stands today! It is a typical example of the trend in the Sikh diaspora to seek own local solutions to the current and future spiritual and socio-cultural needs. This is one consequence of the loss of credibility in the office holders at the central Sikh institutions of the Shromani Gurdwara Parbandhak Committee (SGPC) and Akal Takh Sahib. Due to frequent controversies, lack of consistent direction on important Sikh issues and regression of Sikhi to bipran (Brahmanic) ritualism, and take-over bids by derawadi kattar-panthis or just ambitious individuals even in these remote places, many Gurdwaras feel no longer bound to seek central direction. In the process they sometimes end up locking horns with the traditional elements regarding, for example, chairs and tables in the langgar hall; proper excess for wheelchair devotees and chairs in the main hall at the back for those unable to sit cross-legged in the sangat hall.

Where this decentralisation of interpretation of Gurmat and Sikh reht maryada would lead the global Sikhs, remains to be seen. 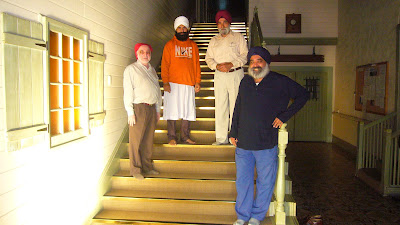 Conclusion of conducted tour of a Gurdwara 21st Century at Adelaide crossroads.

© Gurmukh Singh
Articles in this blogspot may be quoted or reproduced with acknowledgement.