In his letter of 9 October to Singh Sahib Giani Gurbachan Singh ji, Jathedar Sri Akal Takht Sahib, S. Gurmel Singh Kandola, Secretary General of the Sikh Council UK, thanked him for “a constructive meeting which paved the way for furthering the cause of Sikhs living abroad.”

S. Gurmel Singh’s letter of 9 October, also introduced me as member of the Council’s Board of Jathedars visiting Panjab, and suggested a follow up progress meeting at Darbar Sahib in the first week of November.

The main aim of this meeting was to agree regular (routine level) consultation process between Akal Takht Sahib and the Sikh Council UK, and also extension of the same process to representative organisations in the Sikh diaspora countries.

Renowned global Kirtania, Bhai Dya Singh of Australia, who led the religious proceedings from the Sikh side at the Parliament of World Religions in December 2009, also attended as an observer for Sikh Australians and the Australian Sikh Council (see footnote).


There were two main aims of the meeting following on from discussions with Singh Sahib on 29 September meeting:

- To link Gurdwaras and Sikh organisations at national and international level with Sri Akal Takh Sahib.

- To set up a two way consultation process at working level, supporting and briefing Akal Takht Sahib, while seeking regular advice and additional practical level guidance about Sikh Reht Maryada e.g. about “mixed” marriages when one partner was a non-Sikh, same sex marriages, misuse of chairs and benches in Gurdwara halls etc. (Draft paper about “mixed” marriages in English and Punjabi, and position paper on same sex marriages, were handed to Singh Sahib.)

Main points were also given to Singh Sahib in Panjabi.

Singh Sahib continues to show a keen interest in a “Supreme” (Vishav) Sikh Council at world level, linking national level Sikh councils. He agreed that the Sikh Council UK is ideally placed to give support and advice to promote this initiative. He appreciated the Sarbat Khalsa ideal as the founding principle of the Sikh Council UK, bringing diverse Sikh organisations (“garam/naram” factions) and Gurdwaras together, while keeping an open door for those who remain undecided about sitting around one Panthic table.

While understanding the parameters of his position, I was much impressed by Singh Sahib’s grasp of global Sikh issues and what needs to be done. The “maan-maryada” and authority of Sri Akal Takht will be enhanced through communication with Sikh diaspora and exposure to modern challenges faced by the global Sikh community.

A point stressed by S. Bhupinder Singh was that serious correspondence (postal or by e-mail), must be constructive and uphold the high position of Akal Takht Sahib. Such communications will be responded to as directed by Singh Sahib at the meeting. I had a further follow up telephone discussion with S Bhipinder Singh on 7th November to ensure clear understanding of issues. He accepted that our communication will be mostly in English, which can be translated by Sri Akal Takht Sahib Secretariat as required.

Organisations promoting grass-roots (Sangat) representation in the diaspora countries, are now in a position to link up and initiate upward reform of our central institutions by bringing them face to face with 21st Century issues. Yet, the only way to make progress is to understand and take into account the political pressures under which the senior office holders, including Jathedar Akal Takht Sahib, are working. To show this understanding is not to yield to such “politics” and negative influences, but to counter such forces and to strengthen the position of the office holders by inviting them to respond.

Research, advice and guidance is always a two way process. Sikh scholars should form panels wherever they live, produce research and draft papers, and submit these through national organisations, to Akal Takht Sahib for consideration and issuance, where necessary, of related formal guidance by the Singh Sahiban.

Above are some main points which Singh Sahib ji received in writing and himself added to in discussion.

Permission was sought and given by Singh Sahib for these matters to be reported in news and further discussed by the Sikh Council UK and other national organisations in diaspora countries.

Following the meeting, Bhai Dya Singh and I were acknowledged by Singh Sahib with siropas, received in humility. 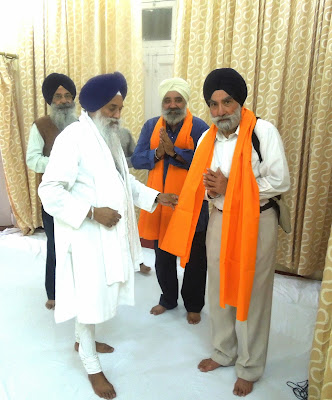